Like I said yesterday, I came across this article on the Muse Online Conference's Free Stuff page. Just follow this link and check out the sidebar for more articles - http://themuseonlinewritersconference.com/joom/

This cleared up alot of confusion I had over deep POV. Hopefully it will do the same for you.

Deep POV – should you use it? by Christopher Hoare

I first heard about deep POV in 2004 when critiquers in the online writing group I then belonged to urged me to change my writing style. One went so far as to throw an acronym at me, ttsfitch, “tell the story from inside the character”. In my revision I tried to comply, and as you probably know, changing is not an easy task.

What is deep POV?

Simply put it is a style that gains the immediacy and close character involvement of ‘stream of consciousness’ without having to accept the extreme of writing in first person present. This means that the writer can use narrative passages to establish scene and action, but have the POV character carry the internalisation.

Here, you can see both the ‘stage direction’ and internal thought that keeps the reader inside John’s mind.

In my Iskander novel “Arrival” I introduce the protagonist’s voice and personality with three words following the first paragraph on page one.

Gisel pushed her way through the doorway as half the crew crowded onto the viewport balcony. The compartment could hold at least fifty while the Iskander was in orbit and everyone floated weightless. After 36 hrs of official silence, the senior officers had decided to let everyone see the mystery for themselves.

Those words from Gisel’s deep POV tell the reader as much about an impatient and irreverent teenager as a whole conventional paragraph might.

Conventionally, an author may have used italics or speech quotes to achieve the same thing – as in About damned time. or even “About damned time.” although then the reader might also picture her as a girl who customarily spoke to herself.

The advantage lies not in these single instances, but in the flow of an entire novel. Properly done, the reader quickly comes to accept the POV character’s internalizations without the distraction of tags or italics. This was what my other critiquer in 2004 wanted to read, to enable him to immerse himself deeper in the story.

The whole flow – action, narrative, and internalisation are accepted as the character’s own without an author persona getting into the scene. And, unlike a stream of consciousness novel, the deep POV can be used for multiple characters – each in their own POV chapter or POV segment.

Recently I found this technique even promoted for non-fiction writing – in this case straight reportage of the Wall Street bailout. This quote is taken from a Der Spiegel interview with author Andrew Ross Sorkin about his book, “Too Big to Fail”.

SPIEGEL: There are many passages in your book like this one: Treasury Secretary Tim Geithner goes for a run, the sun rises over the Brooklyn Bridge, and Geithner thinks of all the poor American workers. It sounds like you are inside Geithner's head. It reads like a novel.

Sorkin: This criticism I understand. Bob Woodward, Michael Lewis and Bryan Burrough have all been writing in this construct; and if I am being put in their league I have a hard time complaining.

SPIEGEL: It's not that simple.

Sorkin: I agree, it is delicate. But every time you add "he remembered, he thought, he told me, he said," it builds a wall between you and the reader, and that is why I left these constructions out. Yes, it is a fine line, a boundary, and for this book I have pushed it forward a bit because the whole point of the project was to lead my readers into the rooms where the decisions were being made, and into the heads of those making the decisions.

Okay, so what are the disadvantages of Deep POV?

It has to be done right – and thoroughly. A single ‘she knew’ can crash the whole edifice. This is where your readers and editors are needed to keep you on track – at least – to keep me on track. I admit I have a strong tendency to drift away into conventional narrative. Sometimes a reader doesn’t know what has gone wrong if I’ve been on track until the transgression. I remember an editor flagging a POV error, but it was actually an instance of my deep POV weakening.

Is it hard to do? For me – yes – it might be for you. It’s hard work keeping those ‘he saw’, ‘she thought’ narrative interlopers at bay. But give it a try – if you succeed your readers will appreciate the closeness; even if they don’t, at first, figure out how you managed it. Editors and publishers will appreciate it too.


BIO for Christopher Hoare
I’m retired from surveying and living in a small community in the foothills of the Rockies with my wife of 40 years, Shirley, and two shelter dogs. I now write full time. My post_secondary training was in engineering and my main occupation was as a surveyor in oil exploration and in dam construction. I had little formal writing education – a winter’s evening classes in creative writing and a couple of writers’ workshops. For a number of years I belonged to an online professional novel_writing group and honed my craft by giving and receiving month_long, detailed writing clinics. I now have a local novel writing group where we submit new chapters monthly, as well as a critique group within the membership of SFCanada where we swap novel critiques.
http://museituppublishing.com/musepub/index.php?option=com_content&view=article&id=83&Itemid=82

Hope you enjoyed that little tidbit. Til next time - remember, "Just tell the story!"
Posted by normaj at 9:32 PM 2 comments:

Don't know how many of you aspiring authors will be attending the Muse Online Conference http://themuseonlinewritersconference.com/joom/this year but if you aren't you should consider going.

Though going is a bit a of a stretch, since it's only as far as your internet connection.

The conference is free but registration closes on September 25. So you better hurry! Trust me you won't regret attending. Here's the link (sic- in case you missed it)http://themuseonlinewritersconference.com/joom/

The conference has really grown in the six years I've been attending. Not only will you have access to some dynamite workshops and live chats sessions with industry professionals...that's right, editors, agents and publisher...but if you get on the stick and register...the opportunity to pitch to agents and publishers.

My friend Beverly Stowe McClure, multi-published author, you can find her at http://beverlystowemcclure.wordpress.com will be giving a workshop and I'm sure looking forward to it!

Just to give you a taste of the stuff that will be available, tomorrow, I'll be posting an article on deep POV from the Muse Online Conference free stuff page.

Posted by normaj at 9:12 PM No comments:

Had a great post planned this week. Was pretty excited about it too.

The picture pretty much says it all.

Even if it was me whining about how life wasn't fair and how the powers that be ought to loose a lightning bolt and fry that creep FATE and how if I were running things no one would have to wear those celluloid affirming tights that masquerade as slacks and how this isn't the Star Ship Enterprise and how you ain't Lt. Uhura and how...how...

Nobody wants to watch a grown woman cry.

Even if she's got the most amazing eyes in the whole wide world. 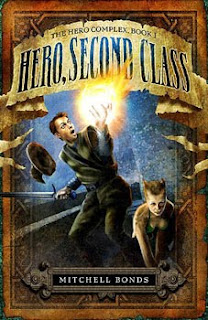 I expected Hero, Second Class to be funny but I wasn’t prepared for the laugh out loud giggle fest it turned out to be. I learned fast not to drink soda while reading. Or tea. And forget coffee. Not unless I wanted to change my blouse after spitting all over myself laughing.

But enough about me!

First time novelist Mitchell Bonds takes the reader on a hilarious jaunt through the imaginary kingdom of Centra Mundi. Along the way, he manages to skew every time honored fantasy tradition in the history of literature. Possibly even in Hollywood. Most definitely on television and certainly those that have been canonized ad infinitum in video games. Maybe because Bonds was only twenty when he wrote this tome (607pages)—nothing was sacred.

The main character,Cyrus Solburg languishes on the tropical isle of Starspeak, second largest in the Citrus Island chain (loved Bonds’ gift for world building) and dreams of becoming a Hero just like dear old Dad. His chance comes when two members of the International Guild of Heroes land on his isolated island seeking recruits. And yes, Heroes have a guild with by laws, training manuals and standard issue weaponry. As do their dastardly counter parts. After a few miss steps and some infuriating roadblocks …things are never easy for our heroes … Cyrus is accepted as an apprentice.

Young Cyrus’ journey to full herodom is complicated by a valorous mentor who narrates his battles, a half-demon arch villain bent on world domination, a droll dragon, and most notably, a feisty cat girl with amorous intentions. There are Manticores, Chimereas , good Mages, evil Mages, High Elves, Mean Elves, and the little known Average Elves. And did I mention Cyrus’ bizarre, uncontrollable ability to shoot lightning bolts from his fingertips?

Bonds’ writing is fresh, witty and packed with some of the most dazzling action scenes I’ve read in a long time. Characters are fully fleshed out, surprisingly; even minor ones. The world of Centra Mundi is so fully realized, I found myself reluctant to depart after reading ‘the end’.

Posted by normaj at 1:23 AM No comments:

Here it is only eighteen days into the new year and already I'm dragging my feet.

I mean what am I supposed to do about that foot high pile of paper. Sure something important could be lurking amid the sprawl.

I'd rather be like the lady above. Standing on the balcony in some exotic locale, staring at the natives. Not squinting at scribbled notes on wrinkled napkins, old Pathmark circulars and over due Con Ed bills I've been trying to ignore anyway.

I'll think about it tomorrow. Hey, it worked for Scarlett!

Just the tell the story… sage advice I read in a book somewhere. The author recommended that we writer chant that whenever we sat at our computer...laptop...I Pad ...whatever...and set our hands to create yet another breathtaking work of fiction. A Pulitzer at least.
If we want to entertain the reader, that is.
You smile. I smile.
Actually we want readers to lust after our books the way a coffee-holic gulps down a Starbuck's hot white chocolate mocha on the way to work.  Coffee. Chocolate. Yum.
Just tell the story...remember.
Uhhh. Right.
Personally those words are written on a heart shaped post-it hanging above my monitor. Can’t tell you how many times my blocked brain sort inspiration from them.
Because when push comes to shove…after the titillating characterization, seat grabbing plotting, exposition sharpening, adjective paring and adverb deleting…all the things needed to make that manuscript shine brighter than a Macintosh red…there better be a rip roaring tale left.
<sigh>
I sure hope so.
Posted by normaj at 5:41 PM 1 comment: